I stare out the window, silently thanking your father for helping you install new speakers in your car because otherwise there would only be awkward air between us instead of music attempting to clear away the quiet that has grown between us. Much like your car, our friendship has seen better days. It makes odd noises and some parts are held together with duct tape but I suppose it gets you where you need to go or you would have traded it in by now. You had practically shoved the iPod into my hand, eager to blast your new speakers so talking wasn’t required. At least you let me pick. I went with The Who. No chance going wrong with classic rock, right?

You’re eager to get home. You are pushing the speed limit and your fingers are tapping against the steering wheel, softly but impatiently. You’re doing that scared animal thing you do sometimes — when you stay quiet and try not to move too much as if you’re hoping everyone will forget you’re there. You’re playing dead but I’m not sure why you think I’ll forget you since you are driving the car I’m in but for you I will pretend I’m not here either. It was different last night when thoughts had flowed freely from your lips but you’re a chatty drunk and now the sun has risen and your words have retreated like vampires into the caverns of your mind.

Watching the world rush past, everything looks so abandoned it’s almost creepy. Most people are probably too hungover to be out; still I can’t help but feel like there was some apocalypse last night and we missed it because that is how empty everything seems. I wonder if it was zombies. It couldn’t have been zombies. The world is too empty even for a zombie apocalypse. We must have missed Judgement Day. Everyone else rose up to heaven or sunk down to hell and we were forgotten because we were trapped in our own little world of you and me and everything we’ve never said to each other. That last bit makes it quite a crowded world.

Before the stroke of midnight, I had wanted to believe in New Year’s. I had wanted to believe you can recreate yourself in an instant because when the countdown finishes it is a New Year and everything changes, including myself, if only I could wish hard enough. But this morning, my mouth still tastes like the lemonade and strawberry rum I was drinking last night. It’s the sweet kind of alcohol that slips between your teeth and seeps into your gums and gets stuck at the back of your throat. I bet you still taste like the SoCo and root beer you were drinking but I wouldn’t know because this is the New Year but there is no New You and no New Me.

Vaguely familiar roads give way to the comfort of an old path home as I wonder what people might have thought about us last night. You took me to your apartment after we had left the party and we weren’t stumbling but we were laughing and talking pretty loudly and it was New Year’s. If someone had seen us outside their window, they might have made assumptions.

But if they had been looking through the window of your apartment last night, they would have seen us sleeping in separate rooms after a ten minute argument over who should take the couch. You always try to be the gentleman as much as I’ve tried to help you break that bad habit. So after I finally convinced you that if you slept on the couch, I would sleep on the floor before I took your bed, they would have seen you reluctantly retreat to your bedroom, shutting me out completely with one close of your door.

Once the lights were out they would have seen me, still illuminated by the street lamps and kept up by the lack of curtains and thoughts about whether our friendship is just as sexually frustrating for you as it is for me. They may have made assumptions again this morning because they would have seen us eating breakfast together in our sweats and washing dishes and being oh so domestic before getting in a car together with an uncomfortable silence that refused to be broken though your iPod was trying valiantly, wielding the strains of electric guitars like a mighty sword but the dragon of our discomfited relationship proved too great for even the mightiest warrior. The grotesque skeleton of your iPod will lay in a dimly lit cavern as a warning for others not to proceed.

But just now, as I step out of your car and towards my empty house, I continue to think about the imaginary eyes that might be watching us. I think how my neighbors might have seen you dropping me off at my home without a kiss or even a smile. Though I suppose that wouldn’t stop them from making assumptions. The fact that you and I always maintain the safest of distances from each other when we speak has never stopped my mother from making assumptions. I’ve even been told our lack of physical contact is the biggest giveaway that we’re having some super secret passionate love affair. Perhaps we are. It is just so secret even I don’t know about it.

I look out the window of my house so I can watch you pull out of the driveway, past the peering eyes of neighborly windows and curious whispers of deserted cars. I try to make out your face as you drive away but the glare from the sun blocks my view. Thwarted again. I think about how nice it would be if liking someone meant they automatically liked you back. Of course, that would be a different universe and something else would probably suck. 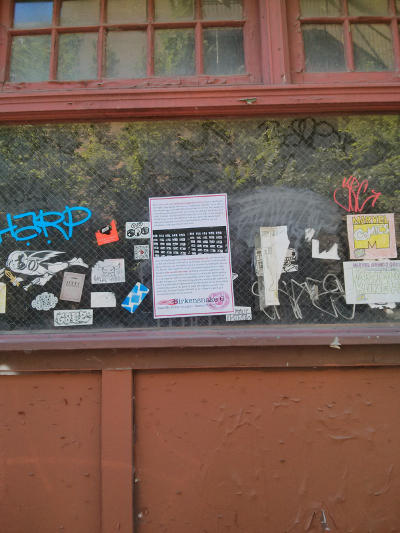