1)
Roger Jeffries leaves the Carroll High School auditorium mid-speech, wheeling quickly out of the parking lot & cruising down the darkened city blocks with a full two tabs of Nicorette plugged in his cheek. A red LED follows, blinking from the treetops. The Jeffries family’s house, similar to all those which neighbor it, soon materializes out of the darkness. It stands empty with a foreclosed look about it — the family is out someplace. Roger Jeffries opens the center console in the mini-van and digs out a box of Nicorette. He pops in another, considers the USB drive secured in his briefcase. A casual lean against the leg of the office desk inside, sequestered by walls / blocked from view. Roger Jeffries lets the van idle. He ventures inside the house, courses through the system of rooms and halls and fetches his things.

Something that Roger Jeffries has never officially charted or even presented to Mary in any of their conjugal support sessions, though which he has madly & profusely obsessed over, is that sometimes he stands in front of the fluorescently lit bathroom mirror in their master bedroom suite and stares at his reflection, painstakingly analyzing the appearance of his face and body. He notes each new wrinkle and coagulation of adipose tissue which contribute to his slowly aggregating bodily girth, comparing the existing flaws to how they previously were as they deepen and emphasize themselves. Quietly he recognizes what their intensifying appearances signify: that Roger Jeffries is aging, and his chance to differentiate himself is rapidly deteriorating. He stands this way until eventually he physically watches his reflection age and take on the gray and bitter characteristics of his future cosmetic self, the hereditary extension of his current middle-agedness looking back at him for a few awful moments, a fugitive snapshot, until the image dissolves into the surroundings and becomes a mere intimation of his own corporeal self inside a small, reflexive window of context, no longer signifying the earthly form of the Self Mary so desperately wishes that he discovers and defines in relation to her own.

Roger Jeffries climbs back in the mini-van with the USB distending his breast pocket. He drives across town, between squares of manicured & ratty residential / commercial lawn. He parks in the lot of the EPC office with his headlights beamed on the adjacent cornfield. Roger Jeffries gets out. A breeze runs across the landscape, carrying across the vague smells of

2)
Roger Jeffries & Co. reach the outskirts of Des Moines while Mary speculates: Roger Jeffries’s urges to smoke are his way of communicating a deep-seeded impediment to adequately representing and quantifying his inner feelings, because he has thus far failed to fully articulate his inner-Self in the context of their conjugal relationship and therapeutic exercises. He has instead opted to engage in a behavior which slowly and fundamentally repels those who are closest to him and destroys his meta / -physical Self. Cold Turkey, as far as she knows. Mary has expressed on several occasions, too, her eschewal of the standard notion of unhappy marriages which are unhappy because of some type of conjugal failure; she conceives of this excuse (i.e. the failure of love) as a produced condition meant to both homogenize desire and perpetuate the myth of redemptive purchasing, i.e. the widespread delusion that yes, despite clichéd sentiments to the (admittedly clichéd) contrary, happiness can indeed be bought. Instead she argues that unhappy, taciturn marriages are so because the nature of love and its corporeal-spiritual varieties are left unexamined, which is why, Roger Jeffries supposes, she reaches across the shiny vinyl of the mini-van’s center console and graces his elbow as they turn into the dirt parking lot outside the State Fair Grounds, trolling until he can locate a parking space. Mary’s touch, it moves as though sentient, reading the dips and swells of his body, his physical text. It’s like she’s trying to prove to herself that he’s there, that he isn’t some manufactured / ​computerized hologram. A disbelief which continues as they wander the grounds and the vast flows of people, as though clasped between the palms of their holding hands. They enter the Iowa State Fair Agricultural Building, where the Monsanto / EPC exhibits are housed in adjacent showrooms. Cousin Chet sniffs out the Monsanto display in the main showing area. Simulacra abound: miniature tractors, flat facades of red barns and quaint country cottages, ads for Monsanto, Cargill, Jenni-O, etc. — pictures of crops and smiling Family Farmers — strung up like pieces of hanging art. Most imposing to Systems Analyst Roger Jeffries: the maze of artificial corn which covers the majority of the floor. People drift in and out, observing these contemporary artifacts of the rural U.S. Midwest. The many cultural talismans arranged in a diorama of the present. The customary body fossilized, an object of study.

fertilizer and machine exhaust. The feathered drone following him perches on a corner of the building, honing in. Systems Analyst Roger Jeffries takes out the USB drive, curls his grip around it. The virulent code contained: a type of behavioral reactor which will alter the facets of his self-concept upon broadcast and proliferation, something to destroy the walls or render them irrelevant. A termination of endpoints: Project Ω. Roger Jeffries strides once toward the office building. The dull yellow color of the galvanized steel siding suggests a type of granularity, like it would crumble and stick if one were to rub it with one’s finger. He turns his gaze to the corn, to the blackness lurking between the stocks. 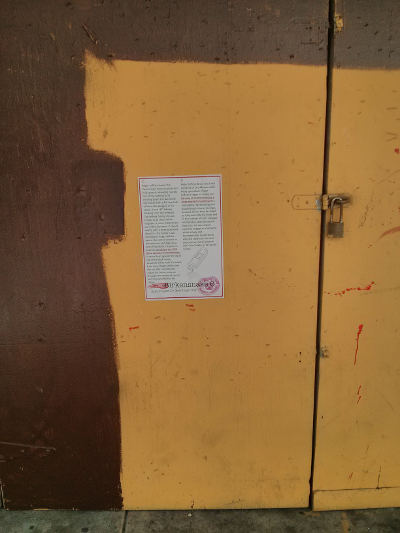