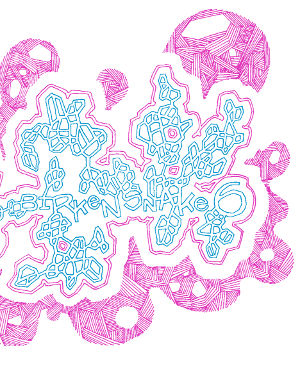 We could have forgiven them any fault but the one that was their own. By then, when you went out for a smoke at earthrise, you didn’t notice how the antique planet spilled bluely down on the plains of Mars. It was just the way things were. Rose-colored clouds and sands like fine, freeze-dried blood had ceased to impress us. It was only human. There was enough air to breathe and, if you slapped on a couple oxygen patches, enough to finance a cigarette or two smoked consecutively, leisurely out in the dunes behind the tavern, no more than that. The unmartial purity of earthlight was something you put up with when you worked the night shift. Annie and that lot always say it gives you cancer to stand too long outside under earthrise but they work days and like to feel superior to the rest of us.

Everyone believes there’s something better outside the perimeter, even though everyone knows there’s not, which is half of why I have a job in the first place. I stand sentinel the first five hours up in the hills above the Mare Sirenum, putting a halt to the ones that try to cross it. The second five are spent below with the generators: strong, fat giantesses huffing up their chemical banquet, churning out big geysers of air that dissipate into the fontanelle above the mars, cling to it in fragile old dandelion wisps. (We have dandelions now, among other invasive species.) The machines are our mothers. We are their handmaids. They are our wives and we are theirs. Outside the perimeter, the air just gets thinner and thinner until there’s nothing at all you can breathe. Wolves and deer in shades ranging from blush to vermillion have evolved with frightening rapidity. You can tell they are native to this place not only because of the color — perfect camouflage in the red-mauve plains of the Mares — but because of the gills — translucent panes of flesh pulsing with light and life, always at work, extracting every morsel of oxygen from the anemic atmosphere.

It was the wolves, really, who started it. When there’s air enough to propagate sound, you can hear them howling like cellos played with a consort of granite bows. That sound is a promise and always we believe it. Some say the wolves are oracles, great councilors, but that they will not tell your future unless you come to them where they live. Many’s the morning I’ve seen a wet gleaming on the sands, a pearly red splotch scarcely distinct from the red of the mars beneath, and known it for the remains of a supplicant I couldn’t stop. You can’t save the ones that don’t want it, Charlie says. But I don’t know about that. I think maybe you can — save them that is. Only it’s harder and mostly they hate you for it.

Others say the wolves are our shepherds. There is a map in the song — at least, that’s how the story goes — to a city under a great crystal dome. In the dome there is air for all and food for all and they are safe from winter and the desert. There, the best of the decadent customs of Old Earth are preserved. Everyone’s got a seat on the council. Everyone dances in the streets. Each night, so many rose petals crash down from the lid of the dome that one or two are drowned, a happy death.

This is what the wolfsong says to us. These are its mysteries. It is a simple song.

In truth, we are jealous of the ones that go, though we know what they suffer. We can forgive them any fault but this: that they do not take us with them. A moy ago, as we went down from the tower for a final cigarette, Charlie caught sight of one of those grisly oblations — a mother and an infant, we learned later, who had somehow managed to slip through the barrier. We had been drinking a little that night and, in any case, she had known to wear red and pink. Like the deer. Like the wolves. The search team recovered a few things — a silver charm, the swaddling bands, a swatch of cheap fuchsia dress, some slivers of bone. Must have slipped through just after earthset, we told ourselves, when it’s hardest to see anyway, spectagoggles or no. Yes, must have slipped through then. Each of us assured the others that no one was to blame. And the whole while the jealousy roiled and cooked in our stomachs like something preparing to give off a bad smell. We leashed it in place and cultivated it, a clever, malevolent pet. It lived there, deep down where it’s a secret, deep down where it’s a drug. I think I stopped drinking for about a week.

Later, we divided the talismans among us — charm, swaddling bands, dress, bone. One of the night crews polished up the bones to a high shine. (They use them to gamble when the shift is slow.) The charm went to me of all people — a trumpery piece shaped like a squashy sphere, the continents of Old Earth picked out on its side in shallow scratches. I keep the thing in the pocket of my flame-retardant jumpsuit, the one I wear when I’m down among the giantesses. Who can say why. We have decided no one is to blame. O you who drown in roses, please forgive.